🚂✋📖 - Learn the choo framework through a set of exercises

To promote exploration and use of open data - currently in beta

The players behind elections

A GTD-inspired todo list that lets you focus on immediately actionable tasks (tasks with no dependencies).

A Node.js module for interacting with the City of Philadelphia's Licenses & Inspections data.

SVG filters not working on firefox

Just to reiterate though, it works fine on your demo site

Not working on firefox

Hey, love the idea for this! It doesn't seem to be working on Firefox for me... I'm using greasemonkey, and it shows the Studio Mini controls, but nothing happens when I adjust them while on google meet. It works fine on your demo site though, which suggests it may be an issue with the greasemonkey script..maybe an old version?

What do you mean open yakyak on a command line? Do you mean check the javascript console in the developer tools of the electron application? If so, I have and there's no logs or network activity.

Hi! Big fan of YakYak, but I've noticed that once or twice per day my messages stop sending. They appear faded, as if they're trying to send, but never do. I fix it by quitting and restarting the application (at which point the unsent messages are gone).

Any idea what might be causing this? For what it's worth I'm on an LTE connection (home LTE router) but that's never caused an issue with any other application (whether netflix or SSH or anything else). 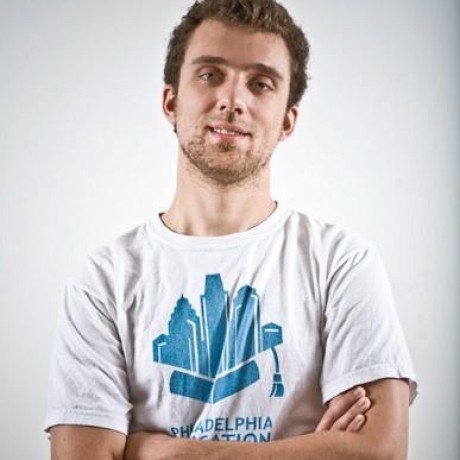 How about a faded dashed line connecting them that, when you hover on it, increases its opacity and emphasises the nodes it connects?

Do you mean aesthetically? I’d assume it’s just another line between the two nodes. Or do you mean how to identify which node to connect to without IDs?

<!-- Feel free to ignore this Issue template if you just want to ask or suggest something. If you experience an Issue then please provide all asked information.

Also please make sure that:

The add-ons toolbar does not have an icon for this extension.

The toolbar should have an icon so I can whitelist other pages, as per the docs.

Solution: In the main firefox menu, click "Customise" and look for the facebook container icon (a fence), then drag it to the add-ons toolbar.

<!-- Feel free to ignore this Issue template if you just want to ask or suggest something. If you experience an Issue then please provide all asked information.

Also please make sure that:

The add-ons toolbar does not have an icon for this extension.

The toolbar should have an icon so I can whitelist other pages, as per the docs.

Just updating the readme with the latest description from this google doc and tidying up the markdown a bit.

I'm sure within a matter of hours or days this will be updated much more comprehensively — this is just an "in the meantime" thing since this repo is being linked to a lot.

Note that this removes the "It is my belief" and "big undertaking" lines (replacing them with the latest description) but leaves in the goals bit (those didn't have a direct replacement from the doc).

Update description - Uses latest description from https://docs.google.com/document/d/14Yg7e73VxXjzpJEwtK-EFkxSdQGdSeGxA4D1NMjKSYw/edit#heading=h.fearqwdeyjim - Tidies up the markdown a bit

A repository for all code related to the Police Accountability Project

Hi! Really cool tool. Is there any support for non-liner references? For example when a grandchild of A has a connection to a child of B, or an item is connected to multiple parents? Basically, drawing a connection between two nodes that are not in the same branch.

CSV columns are all strings by default. We'll need to attempt to coerce them into the desired type of the field they're matched to. ajv does this during validation.

Hi! Is it possible to get an async iterable from a highland object? I'd like to be able to consume it with for-await-of if possible.

Instead of an uploadRow function and an uploadAll function, the import/upload function should just return an async iterable, so the consumer syntax would look like:

or to upload all at once:

Move ImportUI to its own component

Hm, I forget.. will JavaScript await the argument before it runs the surrounding pipeline function in that example? If not, it would be passing pipeline an argument of type Promise. Anyway if that were the case, we could just do const writeStream = await gitSheets.import() before calling pipeline. You're right.

What would be even better is if pipeline simply worked with async/promisy arguments, and it just may, particularly if it's an async generator / async iterable.

I've been knee-deep in stream land for the past few days and finally remember enough to be able to contribute to this conversation again.

What you've proposed may work, but (editing this part).

I've been considering a few alternatives.

A. Use Node's pipeline utility instead of .pipe.

In this case, server.js and cli.js would do something like this:

This would require gitSheets.import() synchronously create/return a Writable stream. The tricky part with that is we need to do some async things before we can start writing (get the config and create a tree). We may be able to do that in some sort of init hook of the Writable stream, and have it not enter a 'ready' state until that's done.

You'll note that pipeline is a promise which returns the resolved value of the promise returned by the sink/destination.

This looks pretty nice, and cleanly solves the problem of keeping csv parsing/formatting in the same place for both import and export. But what about the consistency of the compare and merge methods? Should they return streams too, just to be consistent?

These are a relatively new feature for JavaScript, though the seeds have been around since 2015 with generators. Any object can implement the 'iterable' interface by adding a property with the key Symbol.iterator and the value being a method that returns { value: any, done: boolean }. More recently, the 'async iterable' interface was added, with the key Symbol.asyncIterator. And the 'for-await-of' syntax was added, allowing easy iteration. Streams in Node v10+ are automatically async iterables. Strings and arrays are also iterables. I feel like I've got my head 85% wrapped around this, but it seems to address a lot of the issues with mixing promises and streams. It's annoying to deal with interop but that's probably just because (a) I'm still not 100% around it, and (b) there's not a ton of great toolkits out there for it yet.

Using a lib like streaming-iterables (below), this could be simplified further.

I've come across a few stream toolkits that make this all look much nicer and even improves the semantics of mixing streams with promises, though they all tend to carry some of their own complexity around inter-op. I may just not have cracked it yet.

Hello! I've noticed that streams created with this library do not support async iteration. This appears to be because it depends on readable-stream v2.x.x, and Symbol.asyncIterator was added to that library in v3.x.x, when it started supporting Node v10. I noticed in #21 that there was reluctance to upgrade to readable-stream v3.x.x, but that was more than a year and a half ago.

Would you be open to a PR that updates the dependency? Or does that issue still remain? Alternatively, any suggestions for how I might support async iteration in streams created by this library?

At the moment, uploading involves sending each request individually, assuming most APIs just have a simple POST /objects resource. But we should also support APIs that have a bulk creation resource, where we stream one large JSON payload. Or line-delimited JSON. And perhaps we allow implementers to configure the batch size.

Many APIs require the payload be nested in a {"data": {...}} property rather than all top-level. Some others may require some more complex nesting that is difficult to represent in a CSV file.

The best solution is probably to offer implementers a way to write a "transform" (map) function in the config file that's applied to each row.

A simple one (and maybe we offer this one as some sort of preset) would be:

A more complex one would be an example where the API allows many phone numbers to be passed as an array, but the CSV file simply has a phone1 and phon2 column:

Use ajv (or similar) to validate each row against json schema before sending.

But what to do when a row fails validation? Ideally, uploading would pause and the UI would offer a form to fix the row manually and resume uploading.

I was able to get it to work using filereader-stream.

I'm not sure how to verify that it's not simply loading the whole file into memory anyway though :/

Okay, I think I've incorporated all of your feedback. I dropped the separate TokenGenerator module in order to keep token generation and hashing functionality separate. I moved hashing to a static Passwordless.digest method as you suggested, though the only way I could see to do that was on the Passwordless module - let me know if there's a better way. I also added a couple tests for the configurable bits.

Beyond this, I think it's just a matter of updating the readme to reflect (1) how to upgrade/migrate, and (2) how to customise hashing.

Looking forward to your feedback.

According to the docs this should get it in all 3 environments. Note that deivse uses a helper class for this to support multiple versions of rails out of the box. We could copy that, or just point them here if they're using an older rails version. 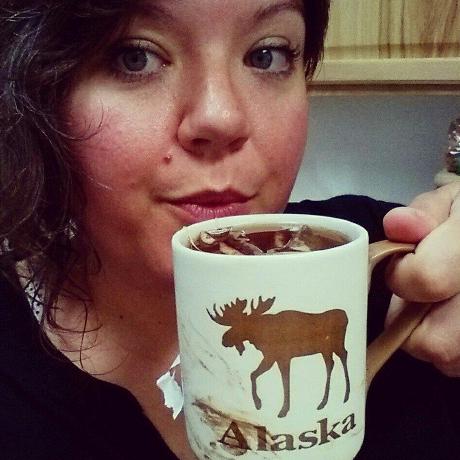 btw, if you go into the browser's developer tools when you load the vizwit page, then click on the network tab, you can see the failed request (it's red). If you go to the 'response' subtab, it will show you the error from carto: 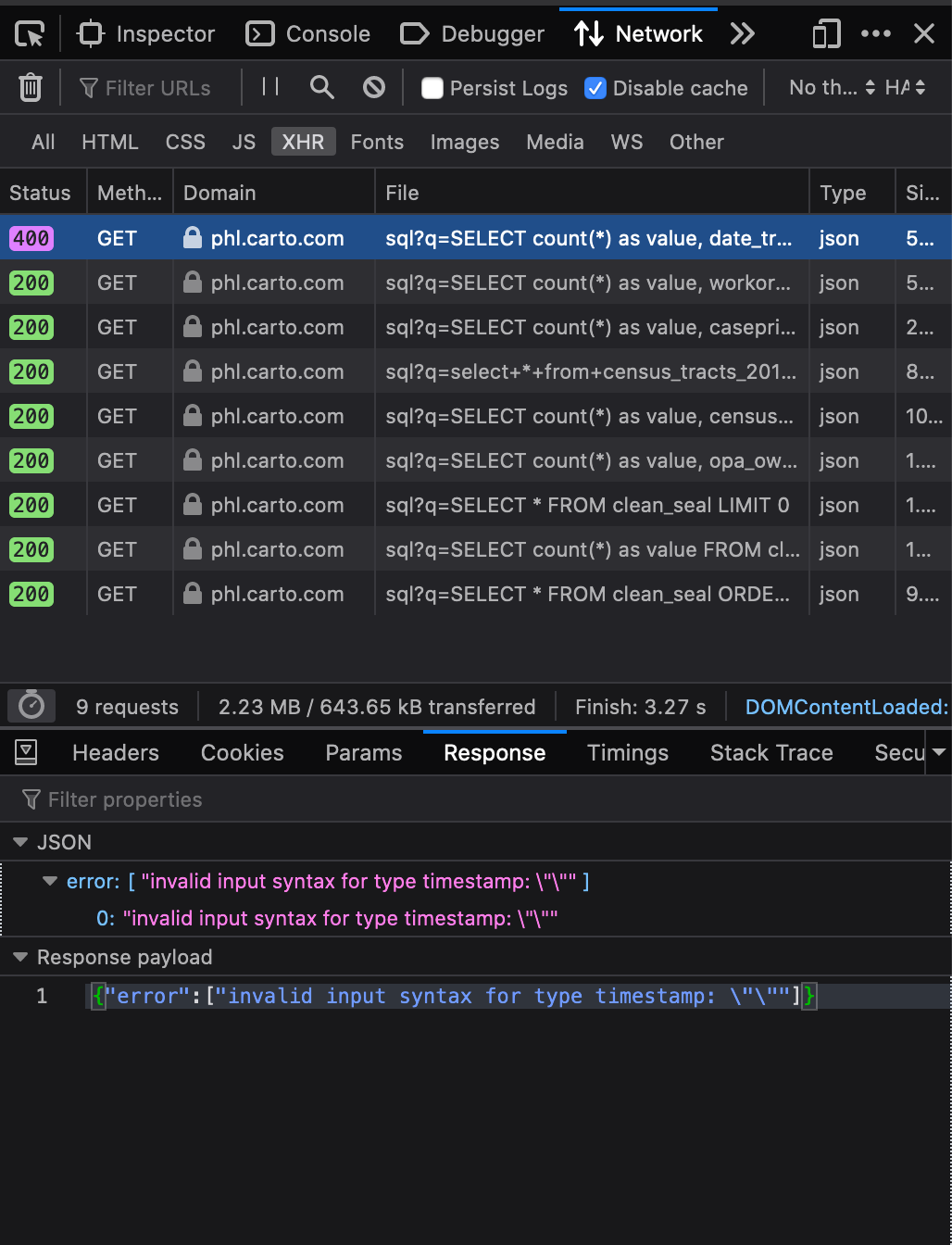 If you look at the details of the request (in the headers or params subtab), it will give you the URL, which contains the SQL that vizwit actually generated:

Judging by the error, it looks like the issue is that the WHERE clause is comparing a timestamp field to a string, which must be invalid for some reason 🤔 But IS NOT NULL seems to work.

Hm, when I remove the 'where' entirely, I'm not getting any blank values; just nulls. To filter out nulls, you'd do:

Did you try that?